The Buddha and the Sick Monk 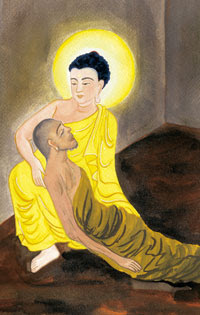 Now a certain monk was once sick with dysentery, and he lay fouled in his own urine and excrement. As the Blessed One was going the round of the lodgings with the venerable Ananda as his attendant monk, he came to that monk's dwelling. When he saw him lying where he was, he went up to him and said, "What is your sickness, monk?"

"It is dysentery, Blessed One."

"But, monk, have you no attendant?"

"Why do the monks not look after you, monk?"

"I am of no use to the monks, Lord; that is why they do not look after me."

Then the Blessed One said to the venerable Ananda, "Ananda, go and fetch some water. Let us wash this monk."

"Even so, Lord," the venerable Ananda replied, and he brought some water.

With this as the occasion and this as the reason, the Blessed One summoned the monks and asked them, "Monks, is there a monk sick in a certain dwelling?"

"There is, Blessed One."

"What is that monk's illness?"

"He has dysentery, Lord."

Has he anyone to look after him?"

"Why do the monks not look after him?"

"Lord. that monk is of no use to the monks; that is why they do not look after him."


~The Buddha, in The Mahavagga

Posted by A Buddhist Practitioner at 1:49:00 PM