A Meal with the Buddha 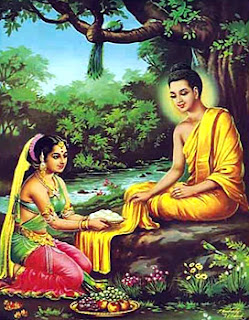 At times, people would respectfully invite the Buddha to their homes for a meal.

When the Buddha accepted these invitations, he would go to the patron's home and sit on the prepared mat. The host would take the Buddha's bowl and fill it with with the best of foods.

After eating and washing his hands, the Buddha would teach his host and those others gathered in the home. The Buddha often spoke of intention. He explained how, after performing a wholesome or unwholesome act the individual has to face the consequences of those actions.

Whatever the response to the action, the Buddha explained, had to be faced.
Posted by A Buddhist Practitioner at 11:25:00 AM

Email ThisBlogThis!Share to TwitterShare to FacebookShare to Pinterest
Labels: Buddhist History, The Buddha, The Teaching