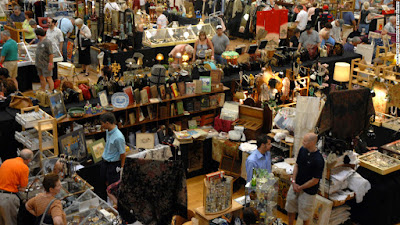 Within Buddhist mythology, a Preta, or Hungy Ghost, is depicted as a frustrated being with a very large stomach and a tiny mouth and needlelike throat. They can never swallow enough food to satisfy their hunger.

A Preta represents the inability to satisfy unending wants and desires.

We can recognize an element of such desperate hunger and hopeless dissatisfaction in the American consumerist culture. This is a culture predicated on a cancerous necessity for boundless growth in a finite world.

Americans have been conditioned by television commercials and many other artful stimuli that creates endless wanting and desire. The idea that one is not complete without 'something else'.

Posted by A Buddhist Practitioner at 2:53:00 PM