Compassionate Action to Save Others 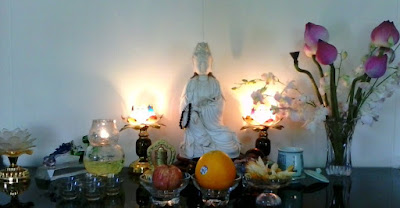 Buddhism, perhaps especially Indian Buddhism, was closely associated with the goal of "supreme awakening," and therefore with a kind of wisdom, especially a kind of wisdom in which doctrines and teachings are most important. Even the term for Buddhism in Chinese and Japanese means "Buddhist teaching."

With the development of Kwan-yin devotion, while wisdom remained important, compassion came to play a larger role in the relative status of Buddhist virtues, especially among illiterate common people. Thus, there was a slight shift in the meaning of the "bodhisattva way." From being primarily a way toward an enlightened mind, it became primarily the way of compassionate action to save others.