Women in the Buddhist Monastic Order 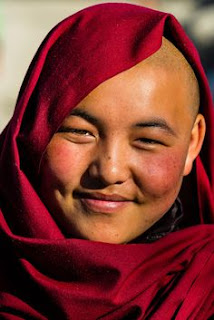 According to tradition, the Buddha first established a male-only monastic order. When certain women who had listened to his teachings, including the wife he left behind when he decided to pursue the truth and the woman who raised him after his mother died, asked to join the group he refused. At this point his chief attendant, a guy named Ananda, asked the Buddha if women were any less intelligent than men. The Buddha said no, they were just as intelligent. Then Ananda asked if women were any less capable than men of realizing the truth. The Buddha again said no, women were just as capable as men of realizing the truth. "Then why can't they join our order?" Ananda asked. At this point the Buddha gave in and said that women could join.