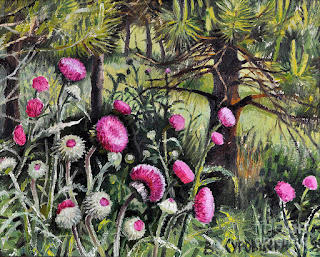 To be fair about some of the antifemale rhetoric that occurs in Buddhism, I don't think most of it was initially intended as a put-down of women. By that I mean that the writers probably weren't trying to send a message to women saying, "Hey, gals! You're terrible." Rather, they were heterosexual men trying hard to cope with celibacy and trying to help other hetero men do so by saying, "Hey, guys! The celibacy thing is tough, but if you think of women this way you'll be able to deal with it better."

It's a lousy strategy, if you ask me. Obviously it had the unfortunate consequence of making celibate male monks think of women as almost demonic creatures and led to some of the discriminatory practices Dogen denounces in this essay. It encouraged such frankly idiotic supposedly "Buddhist" customs as monks not being allowed to even so much as shake a woman's hand. This foolishness is still practiced today even by Western converts to certain traditions. Personally, I have no respect at all for that kind of nonsense, no matter how ancient or traditional it is. By the way, I do not particularly care if you're offended by my attitude. I find this repugnant misogynistic practice far more offensive than you could possibly find my attitude toward it.