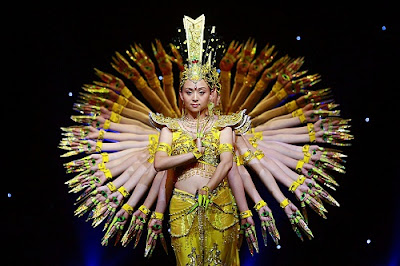 Ungan asked, "What does Kannon, the Bodhisattva of Compassion, do with her bazillions of hands and eyes?"

Dogo answered, "She's like someone reaching for a pillow in the middle of the night."

Ungan answered, "The entire body is hands and eyes."

Dogo said, "No matter where you go it's all hands and eyes."

Lots of people have tried expressing what compassion really is, but nobody has ever equaled Ungan and Dogo. If you really want to know about compassion you should study their words.

Note: In Sanskrit Kannon is known as Avalokiteshvara; In Chinese he/she is know as Quan Shi Yin.
Posted by A Buddhist Practitioner at 3:39:00 PM